A Wagie Ride for Tuesday

Ok so while Debi was away saying goodbye officially to Tuesday, I thought it would be nice for us to do so in spirit over here.
Deb’s mom came over with her bunch and brought a bunch of balloons (pink of course). We attached binkies to the ends of some of them and wrote messages on them for Tuesday.
Emma and Will were just excited to have balloons (as you can see). 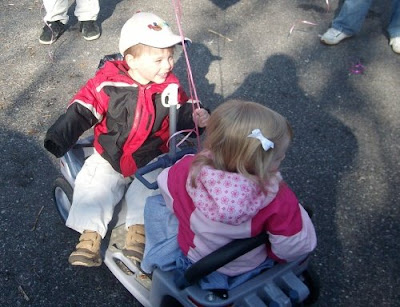 When it was time to release the balloons we walked about halfway down the street where there weren’t many trees, dodged a couple cars which I am sure had no idea what the heck we were doing, posed for a picture or two and then the big moment we let them go!!! 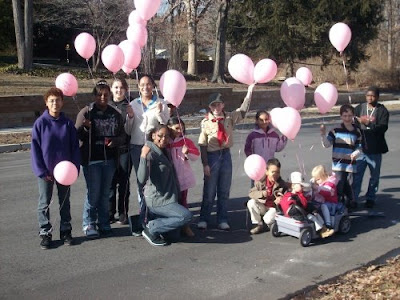 Sadly the ones with the binkies didn’t go anywhere so we had to yank them off. And of course Emma and Will were completely devastated that the balloons were flying away. We just had to tell Emma that it was for Tuesday because we needed to say “goodbye to Tuesday” and she got over the vanishing balloons.
Some of the balloons got caught up in the trees down the street. I figured that was a good time for us to get outta there before Obama and the green police hunted us down and threw us in jail for global warming. (Sorry had to throw that in there…)
Well it has been hard for me to do and I am sure so much harder for Tuesday’s mom and dad, because no parent should ever have to say goodbye to their child unless it’s just to go somewhere, or when they go to school, or whatever. And I know I am being selfish but I thank God I am not in their shoes because I don’t know that I could do as well as I believe they have been doing.
And although I never actually met her physically I feel I knew Tuesday very well, I certainly feel like I know her family pretty well and can only use them as an example of how I want to proceed with the rest of my life.
So here it goes…
Goodbye Tuesday…

Make sure you check out these blogs for more people holding wagie rides for Tuesday too.
Moms Without Blogs
and
Life, Liberty & Pursuit