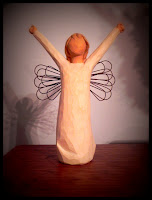 A week ago, I received a gift from a fellow blogger and friend, Beth. She sent me a beautiful figurine that represents courage and a book, titled unfaithful by Gary & Mona Shriver. The gifts arrived maybe an hour before I left my home for Bloggy Bootcamp last week and while I packed the book with me to read and did start it, I didn’t end up really opening it to read until this week.

This past week has been
difficult.

There has been a dark feeling surrounding me and try as I do to pray, it’s hard to hear God’s grace over the deafening sound of my anger and hurt.
I am consumed.
There hasn’t been a moment this past week where I haven’t thought “how could I have been so stupid?”
My thoughts go over and over and over the past seven months.
I replay the days in my head, looking for signs.
Looking for …. I don’t know what.
Answers, I guess.

I shoot questions at Russ over and over.
As they enter my mind, I fire them off at him.
I can’t help myself.
I want to know….

I don’t want to know.

I was reading unfaithful last night and was sobbing.
The story is written by a real couple that has been through infidelity and come through to the “other side”.
It’s their story, and how they coped (or didn’t) when it first happened and many months later.
Their story is my story.
Or so similar.

As I read these words by Mona, my heart was breaking again:
Gary was not the man I had thought he was, but I was no longer sure who I was either. For that matter, who were we as a couple? Were we a couple?
I looked at him and froze. This was the man I’d been married to for almost twenty years. He’d been my lover, my best friend, and my confidant. My family loved him because he was so wonderful. All my friends thought he was wonderful- he did dishes, laundry, and changed diapers. I had lost count of how many times I’d been told how lucky I was.
My body was numb, wooden, overwhelmed. The weight Gary had walked into our bedroom wearing was now being shared.

Those words Mona chose so perfectly describe how I feel.
I am numb.
Wooden.
Overwhelmed.

I feel like I have stepped into a horrible nightmare that is now my life.
Where all I do is cry.
Or think.
Or go through the motions.

There was another part where Mona described feeling like she really didn’t know her marriage after all and what hurt the most was knowing that she knew better than Mona did.
I get that.
Totally get that.

It was Tammy’s joke in her texts to my husband.*
That I was a fool.
Living in a fantasy world.
And she wanted to “knock the queen from her pedestal”.

She did.
And Russ did.

They knocked me down and trampled on me.
on my life.
And now, Russ’ weight has been lifted.
Or shared.

His biggest fear was losing me.
He didn’t.

My biggest fear….
being unable to forgive him,
unable to look past the infidelity and move on.

I pray each day that God will take my burden,
that He’ll carry me,
He’ll ease my sorrow and comfort my soul.
Because today, and yesterday, and the day before I felt nothing.
Just numb.
And alone.
And I’m scared.

* I do want to clarify. That while my husband did do many wrong things over the past 7 months, the one thing he didn’t allow was for Tammy to verbally insult me without him telling her to stop, to leave me out of the conversation, and that what he had done had nothing to do with our marriage. He very outwardly told Tammy that he loved me and that I was “off limits” and that even if we divorced, he would never be with her. (I read his texts myself) It was Tammy who hated me, not Russ. As horrible as what he did to me is/was, I don’t want to blame him for things he didn’t do.