Hours in the ER with Teddy 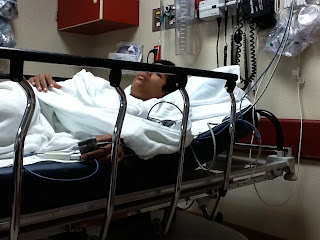 Last night the kids and I watched the movie Letters to God. This was after I had spent HOURS in the ER with Teddy because he woke up yesterday morning unable to talk or move his mouth or chin because of a huge mass under his chin…
Turns out, the movie was exactly what I needed to see.
It was a movie that, while sad in the end, was uplifting and filled with so much love for God, so much faith, that I was able to relax after a very, very trying day and feel nothing but Thanksgiving.

Three days ago Teddy started complaining about a sore throat. It was the same sore throat that Keith, David & I had all already had, so I told Teddy to take some Motrin and get some rest.
The Motrin was clearly working because he spent the next day over a friend’s house swimming in the pool & having Nerf wars.
However, that night, as he was heading up to bed, he again complained about a sore throat and said he felt a bump on his chin that hurt. Russ & I both tried to feel the bump, but felt nothing, and we gave Teddy another Motrin and off to bed he went.

Yesterday morning, he woke up and slowly made his was downstairs and laid down on the bench in the kitchen. I turned around to “yell” at him to sit up and one look was all it took…
Teddy was very sick.

I quickly got dressed and within a half hour he & I were on our way to the ER, stopping once for him to throw up on the side of the road.
To say I was beginning to panic on the inside is an understatement…
Teddy was losing consciousness and was covered in huge beads of sweat.

I pulled up next to the door of the ER and while Teddy was struggling to get out of the truck, I rushed to get a wheelchair for him. The triage nurse saw me struggling and made it outside just in time to help me catching a collapsing Teddy in my arms. We both put him in the wheelchair, I told her his name, she wheeled him into the ER and I parked the truck.

By the time I entered the hospital and signed the papers, Teddy had already been seen by the attending physician, had blood drawn, IV inserted, was dressed in a gown, hooked up to many monitors and was asleep.

And the waiting began.
And watching him struggle in pain and being able to do nothing to make him comfortable….
feeling helpless.
Completely helpless.

They took him back for a CAT scan and still, we waited.
And he continued to be in pain and I found myself becoming angry.
Annoyed.
His nurses knew he was in pain and they did nothing and while I understood why they were waiting, it was still so hard to have my son looking at me, begging with his eyes, to do something, anything, to help him.

Finally the doctor came in to tell us it wasn’t my worst fear.
It wasn’t cancer.
(it’s always cancer in my mind. Always. Ever since Tuesday. I just can’t help it. I wis I could, but I can’t.)
It’s a massive infection.
And he needs to see a specialist on Monday.

They gave him Tylenol with Codeine and for the first time that day, Teddy was able to feel comfortable and even sort of smiled.
And the grip was able to loosen a little on my heart and I was able to breathe again.

We drove home, Teddy sleeping at my side, still sick, but feeling better.
And all I wanted to do was sit with my babies, all of them, and be thankful.

We did and we are.